After the service, we will have Fellowship Time in a Zoom video conference.  Details for joining will be shared via email and at the end of the live stream.

The Building is Closed and the Church is Open

While we have restricted access to the building, Peace Church is very much open to ministry—working to respond to our own congregation, as well as the needs of our neighbors and community.  Please consider giving either to Peace Church general fund or the Gabriel Fund – which is used to meet the needs in the community.

We recognize that in this time, people’s financial situations may have changed. We ask you to prayerfully consider what you can give.  If you use electronic giving, we thank you for your constancy of support.  If you would like to give through our online form, we would be grateful. For all the contributions from our members and friends—whether financial, time, or prayer—we ask God’s blessings on those gifts that Peace Church may be healing balm in this time when we are living in our own Gilead.

Announcements and the Ringing of the Peace Bells

God is Revealed as We Gather

Unison Prayer of Confession
God who is our Mother and Father, we sometimes are numb to the fact that you are luring us into greater and greater possibility, equity, justice, mercy, and peace. We forget that we are beloved by you, that the earth holds us, that our community holds us.

You remind us that alone is not the truth of who we are. You bring a fresh wind into our hearts and guide our hands in creating a culture where doing the right thing is irresistible. Through you, we remember we are whole, we are holy, we are holding one another.

Story for All Ages Nathan Holst

God is Revealed in the Word

Father’s Day . . . today we remember  Father Abraham, father of all three of the major faith traditions – Jewish, Muslim and Christian.   Father Abraham of  two little boys  Ismael and Isaac.  Boys born over  4,000 years ago.    Boys whose stories are also part of our stories, their stories intertwined.    Two sons with different mothers, Hagar and Sarah.  We don’t always know their stories, especially not Hagar’s.    Two sons whose mother’s hopes and fears will determine so much . . I couldn’t help but think of the fathers and mothers who worry about their black and brown skinned children these days . . Moms and Dads who worry so much about their kids.

Sarah too has worried, she been harassed and tossed aside as barren.  Sarah has been through  a lot. She gave her slave girl  Hagar to her husband Abraham that an heir might be conceived.   Ishmael is born . . And them amazingly . a decade later Sarah does conceive in her old age.   God gives Sarah and Abraham a son,  Isaac.  This is where the story begins for today.

Isaac grew and was weaned . .And Abraham made a great feast on the day that Isaac was weaned. . . .  Isaac is growing up . .he will no longer be part of the women’s tent now  .Isaac will go to live in the men’s tent. . .His mother Sarah is in grief,  He will no longer lay next to her each night. She is already grieving this child she has waited for so long, the one she loves so much.     She fears   And her fear twists itself into a deep jealousy .. she sees him playing with Ishamel his half brother.    She  goes to Abraham and ask him to cast off Hagar and Ishmael.    She fears Ishmael may receive the inheritance she believes is Isaacs.

Now Abraham is in deep despair,  he loves both his sons.  How can he send his teenage boy out into the desert .. .   Somehow he learns from God it will be okay—great nations shall rise from both his sons.  And so with just a few supplies—Hagar and Ishmael are sent out into wilderness.   They leave taking only a loaf of bread and a skin of water.

Hagar wanders with her son in the wilderness of Be er sheba.   It is in this in- between place—that not there yet place  — in the midst of her fear and despair that she encounters God.     She has fled to the wilderness before when  Sarah mistreated her.   In that wandering she met a divine messenger by a spring of water on the way to Shur and he said,  Hagar Sarai’s hand made from where have you come and where are you going?  And she said,  “ I am fleeing from Sarai my mistress.”    Hagar, an outsider, is the first person in the Torah to meet such a divine messenger. She is greeted by a question, a friendly encounter, not a night time attach such as Jacob’s wrestling match at the Jabbok.

Where are you going?     Hagar has acted on her belief in her personhood and left.  In this first encounter with the divine—her courage is recognized, but she is asked to return in order that the story might continue.  She can return and be subject but not  lose her ability to act on her own behalf.   In fact the divine tells her, a woman that see will  have countless off spring.   She is the only woman this promise is made to in the Bible .   And it comes true – the prophet Muhammad lineage comes through Ishmael to Abraham.  We are all connected –Muslim, Jew and Christian to father Abraham,  brothers and sisters all.

Hagar  names her tiny son Ishmael, meaning God hears. God has heard her in the fear and affliction.     And she leaves the first encounter with God by saying God’s name—El Roi–  The God who sees me.     God has seen this mother–  She returns to Abraham and together they bear Ishmael.

But her story is not done—another time of being in between, another time of fear, a sojourn in the wilderness.      She is there with only some bread, her son and a skin of water.      The bread is gone, the water is drained,  parched she sits with her son and fear takes the place of faith.   A desert time . .

Hagar seats Ishmael in the shade of a bush and sits down opposite – she will not look upon this scene.      She repudiates the power of seeing . I shall not look upon the death of the child.   Everything seems to have come undone.   She has come to the end—losing the son, the power of the God who sees even her and life.

And yet as Rabbi Toba Spitzer writes,  even here Hagar has not completely lost her power to act . . .  she went and sat herself opposite .  .   I shall not look upon the death of the child . .so she sat opposite and she raised up her voice and she cried.  Chagall has a powerful painting of this 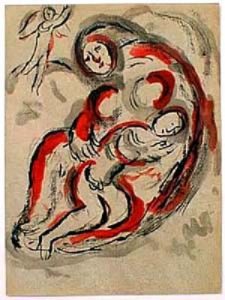 She will not remain a silent participant in this wilderness.  She gives voice to her fears.  She opposes what is happening by sitting opposite it all.    She pleads her prayers.        She closes her eyes and cries   God hears . . hears the child Ishmael . . . he amplifies his mother’s cries—cries rise to heaven.

As she sits and cries,  as she claims there is no other way . . . .God opens her up.   she lifts her eyes and she sees.  Something she could only see in the depth of her emptiness,  when there was nothing left to be lost . .she sees the well    Sight returns and with it life giving water.           With the water there is hope.      And the story continues.   Hagar fills the flask and sustains her child.     He will become the father of a great nation.

In the in between places, in the midst of her fears,  Hagar finds God and she finds herself, her power to act.         It is almost as if she had to go to the wilderness  . . in the wilderness she was no longer someone’s slave.  In that in between place she cries out and finds a way to move forward.  Wells of hope in the desert . . water in the driest point of her life.

Bill Moyers makes the following observation about this passage in his book based on the TV show in which he gathered a variety of scholars to discuss the book of Genesis:

“Sometimes the details of the stories we are discussing from Genesis sound like pulp fiction. In this one we come to the first triangle: Two women share the bed of the same man. The squabbling gets mean. Everybody gets hurt. The stuff of a cheap novel and a fast read. But peel back the layers and the Bible is Tolstoy, Shakespeare, and Faulkner. The themes in this story are deep and painful – a woman’s infertility, surrogate motherhood, class differences, and the price human beings pay for God’s will to be done. And something else: This triangle does set off fireworks, and by the dawn’s early light Judaism and Islam go their separate ways.”

The God who saw the burdens and heard the cries of the Hebrew slaves in Egypt, the God who came down to save them with a mighty hand, is the same God who first saw the outcast child under the bush in the desert, hears his mother weeping, and tenderly brings them to water and promises that they too are highly regarded by God.   We are all family . . .

The message is not just about nations and tribes; it’s about people, about individuals, about us. When all have forsaken and forgotten us, when life has passed us by and all around us is a desert, and our dreams are over there dying under a bush. That’s when we need to remember this old story. We need to know that God sees the tears of an outcast woman and an abandoned child. We need to know that God hears us even when we feel godforsaken.

There is hope . . I felt such great hope  for God’s children this week in two of the Supreme court decisions    On Thursday The court ruled that the administration could not immediately end DACA –Deferred Action for Childhood Arrivals.  The Court’s decision also put on hold any plans to round up more than 700,000 young immigrants — many of whom have been living in the United States since they were small children — and deport them to foreign countries they may not even remember.

And on Monday The majority of the Supreme Court  ruled that Title VII of the 1964 Civil Rights Act, which prohibits discrimination “because of” sex, extends to people who face job bias arising from their sexual orientation or gender identity. Gorsuch said the “message” of the law is “simple and momentous: An individual’s homosexuality or transgender status is not relevant to employment decisions. That’s because it is impossible to discriminate against a person for being homosexual or transgender without discriminating against that individual based on sex.”   This is crucial because More than 7 million people in the US identify as lesbian, gay, bisexual or transgender, according to the Williams Institute at UCLA. Of those, about 4 million currently live in states where laws do not protect workers from discrimination based on sexual orientation or gender identity.

Together we hope .. God opens our eyes to see the wells of hope  and we continue seek the wellness of one another for we are family.  We are all children of Abraham.     Happy Father’s Day.   Amen.

We Respond to God’s Presence