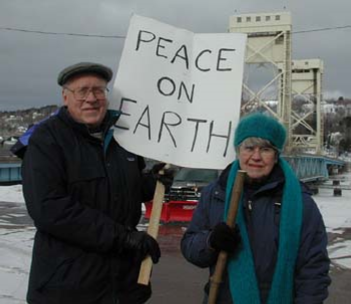 “It’s good to report that I am part of the Acting for Justice Hub! My memory goes back a long way. [Vi celebrated her 93rd birthday December 1.] My models were the older women in the “Ladies of Kaleva” society,  working for recognition of Finnish immigrants. I am still a Kaleva Lady today, and just last month demonstrated how to make prune tarts. My father, too, was a model. He worked in the copper mines for 12 years when he came from Finland,  but got out as soon as he could. He was a real do-er.  Joo piisaa lörpötys was a favorite expression. It means ‘that’s enough foolish talk–let’s get down to business!’ I like that.”

“I got involved in environmental activism because of my husband, Bob, no getting around it. He was a real firebrand. I was always holding onto Bob’s coattails so he would stay within bounds. We got called “commies,” “tree-huggers”. I wrote a letter to our local paper, the Daily Mining Gazette, about our community peace marches, which they titled “Peace Pariah Protests War” and put the headline on the front page! Well! We just laughed–I was 80 years old!”

Vi and Bob Brown were peace activists. In the mid-1970s, they worked to prevent building the ELF defense antenna network in the Upper Peninsula of Michigan.  “In retrospect, we really accomplished a lot and people came around to appreciate it. Of course I wouldn’t have been so bold if I didn’t know it was the right thing to do—being stewards of the earth as the Bible says.”

It was the Browns’ love of and admiration for the environment that led them to become actively involved in protecting it. The UP has not been used for uranium mining or as a nuclear waste dump site in part due to the Browns’ environmental activism. They also were active in Michigan in the fight against Reserve Mining in the 1970s. “The environment is part of living–if we don’t take care of it, we’ll have nothing left for our children.”

Together the Browns fought against the arms race and on the side of education, health care and social programs. Vi believes that excess military spending leads to more human suffering in the long run.

Bob and Vi took their love of humanity, kindness and compassion to China, Finland, Turkey and Trinidad. Vi invited many newly arrived foreign visitors into her home to help introduce them to their new life in the United States, teaching English, cooking and other skills. She still enjoys visiting with new people at church and making people feel welcome and is happy she can participate in Acting for Justice.