Benjamin Fena:  Becoming the Change He Hopes For 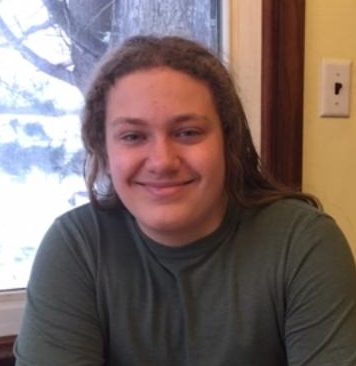 Benjamin Fena will be sixteen years old in early March, and he has been thinking a lot about his commitments and his capacity.  After attending a public elementary school, Benjamin decided he preferred home schooling. His parents, Libby and Andy, had a sense of his gifts, and encouraged this approach to learning.  As an independent learner, Benjamin is taking more responsibility for his own learning experiences.  This has made him curious, articulate, questioning, and full of hope.

Benjamin is the oldest of three siblings, and he seems to enjoy the responsibility that generates.   Whether it is the teamwork of family camping trips to the BWCA or teamwork on a learning project with Ed Vision courses, He enjoys the social and emotional challenges of shared learning.  This has grown from his background with home-schooling but it has been strengthened though interactions with a variety of learning partners.   He has just completed work with the YMCA’s Youth in Government program, modelling the legislative process in state government. His team invested a number of hours of research for their presentation, which was highly regarded by state mentors.

Benjamin has also worked with the Kids Plus program of the Northland Foundation to serve the community at St. Anne’s.  By providing a variety of services from cleaning, technology, and domestic services, youth leaders found gratification in the appreciation of their capacity for giving and helping others in need. By serving older members of his community, Benjamin recognized the values that youth can share with others.

One of the most meaningful groups that has helped Benjamin develop his leadership and commitment skills has been Kids for the Boundary Waters.   He has been on many family trips to the BWCA, starting before his 1st birthday.  His parents raised him with a deep appreciation for the natural systems we enjoy. His work on the Kids for the Boundary Waters team took him to Washington, DC to represent the non-market values of the BWCA as well as its economic value to the region.  Seventy students went face-to-face with Federal leaders in Congress and the Departments of the Interior and Agriculture.   The students were well prepared and informed, and felt that they made a difference, and that their message was heard by Federal leaders.  Experiences like this generate hope and build greater commitment.

In addition to his work with several organizations, Benjamin also has been on the East High School cross country ski team. He takes pride in his development over six years as a biathlete.  His training in skiing and shooting has given him both drive and discipline which work well with his growing curiosity and commitment.  He is also a member of the choir at Peace church.

As a result of this fertile mix of athletics, service, and academic teamwork, Benjamin has started to identify and focus his gifts, particularly in terms of environmental justice.  He enjoys debate and dialogue.   His research and presentation skills have been growing each year. The hours invested in collecting data and practicing the persuasive presentation of their logic have resulted in powerful experiences which have added clarity to his thoughts about the future.

Benjamin is realizing that he may have the skills and drive to become an environmental  attorney. From his love for the BWCA and his enjoyment of skiing in the woods, he understands that preserving our natural resources for future generations is a high priority.  He is currently working on the background issues associated with the Twin Metals mining proposal on Birch Lake, just outside of Ely and next to the BWCA.   Ben has been learning about Antofagasta, the company that intends to mine hundreds of thousands of tons of ore to harvest nickel, copper, platinum and gold.  He has begun to evaluate how the economic and non-market factors may affect the BWCA and the regional economy.  He is excited by what he has been learning and is hopeful that there will be a sustainable outcome for the next generation.

When asked to identify some of his core hopes for our future, Benjamin responded,  “We should be the change we hope to see in the future!” He takes his responsibility for justice very seriously.  This biathlete has both the aim and resilience which are essential for working on issues of environmental justice.