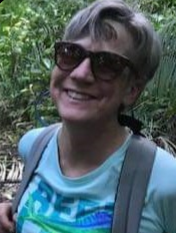 Do not neglect to show hospitality to strangers,
for by so doing some people have entertained angels without knowing it.   Hebrews 13:2

Angie has lived this passage throughout her life, with a deep commitment to “feed, clothe and house people living on the margins of society.” Many strangers have entered her life, and she has responded with compassion, humility, and service. In return, her life has been touched by angels and inspired by the courage of others.

Angie grew up in a family that welcomed many foster children into their home, and the reality of “extravagant hospitality” was etched into her being. Angie’s family taught her how to live a just life on the personal level. She learned about systemic social justice as a graduate student in the School of Social Development at UMD in the late 1970s. That’s where Angie met Steve O’Neil, and thus began their life of putting their faith into action. Angie reflected that through the years the focus of her social concerns has been evolving to include homelessness, equity, poverty reduction, peacemaking, and protection of our environment.

In their early years together, Angie and Steve lived among the homeless in the Community for Creative Nonviolence in Washington, DC. In the 1980s, they settled into the Duluth community and actualized those practices by founding Loaves and Fishes, a Catholic Worker community of volunteers providing housing for people transitioning from homelessness to dignity and self-respect. While raising their two children, Brianna and Brendan, Angie and Steve also fostered over 30 children, providing them with a loving environment. Angie’s activism shifted from the grassroots to the organizational level when she became the Executive Director of Community Action Duluth and led their mission to mobilize people and the broader community in reducing poverty and removing barriers to self-sufficiency.

Angie has encountered so many angels while accompanying the marginalized—people experiencing long term homelessness and mental illness in Washington DC; Guatemalan refugees seeking refuge from violence on their way to seeking asylum in Canada; homeless men, women and children at Loaves and Fishes; small babies needing the warmth of love and care; families living in the midst of poverty in an unjust society.

Angie also has been inspired by the courage of others whose faith has propelled them to step out of the comfort of their daily lives and to take risks for justice. She names her husband, Steve O’Neil, her friend Donna Howard, the Plowshares activists, and Martin Luther King, Jr.

Angie wonders how her faith calls her into action during this time of climate chaos and global insecurity. Over 30 years ago she put her secure life on the line when she spent 10 days in the Ashland jail for her direct action against the ELF (Extreme Low Frequency) installation and the threat of nuclear warfare. Over the past few years Angie has become an avid hiker and explorer of the natural world. In addition to spending a lot of time with her grandkids, perhaps her faith is calling her to take risks in order to protect God’s creation.

“What does the Lord require of you? To act justly, and to love mercy and to walk humbly with your God.”    Micah 6:8