Abbie Amundsen: Honoring the Who and the Why — Politics, Justice, and Hope 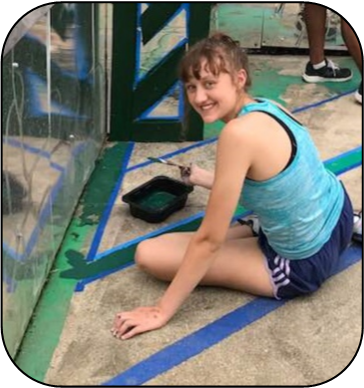 Back to Justice Ministries
Elections and politics are important to Abbie Amundsen. Maybe it’s partly because it’s been in the news a lot lately, but she wants to see a government where our leadership is reflective of who we are as a people. Sometimes it feels like decisions are made for us, and the people don’t have the voice they deserve.

Being in law class this semester during her senior year of high school has opened Abbie’s eyes to the flaws in our systems—for example how policing or the criminal justice system generally tie into our elections. “When we know that one in three black men are incarcerated, you start seeing how that has broad effects on communities and families. When we talk about elections, we can get caught up with the individual politicians, when we should focus on the effects of what they do on people.”

Abbie also thinks about systems and connects the dots. “Immigration is an issue that gets politicized. That’s when misinformation and fear come into play. And then you can tie things together, and look at how high incarceration rates are related. We turn prison issues into political talking points, but then the actual people get lost.” For her, that’s where social justice comes in. Social justice is about connecting with the people affected by policies and going back to the Who and the Why, instead of the What. “It’s easy to say you’re for or against a broad topic, but harder to look at who is involved and affected.”

Abbie sees politics as a place where problems can sometimes become worse, but also a place where they can be fixed. She wants to help get people involved, to feel they can do something together. Though she acknowledges the many problems facing us now, she’s inspired by the recent election of Ilhan Omar and the record number of women in public office. She feels a sense of hope that people are getting more informed about issues, and is especially grateful for the Peace community, where we have a lot of people who care about the issues and people’s lives, rather than just party lines.

Grateful for her own experiences and education, Abbie would like to work to make sure people have similar opportunities for education, and a chance to really be informed. She especially noted the importance of books and documentaries in her understanding of many different issues.

For Abbie, faith is connected to hope. “Faith is a hopefulness and willingness to believe that things can work out.” She has seen faith and justice connected particularly in the community here at Peace—especially in conversations on work camp trips in the summer, “talking to the Warren’s and the Patty’s and seeing all the good people do that is centered in this community.”

Abbie’s inspiration comes from her family and friends. She especially mentioned how inspired she is that her dad stepped out of a safer job track to do what he wanted to do, something he cares about. Abbie said that through her parents’ example, she could take a different approach. She’s also inspired by her friends who are really kind or dedicated to putting in time to groups that benefit the broader community. One final quote Abbie shared came from a recent social media post by Sarah Holst (quoting Harriet Lerner): “If we only listened with the same passion that we feel about being heard.”